In this week’s newsletter...

Thank you to the ghostly figures who have been in and around the club in ones and twos while that was allowed, and working from home– cleaning, mowing, maintaining computers, nurturing pot plants and other assorted tasks: John Hempenstall, Ian Pryor, Trish Pryor, Sue Doyle, Val Carmody, Keith Mitchell, Judy Netting, Perelle Scales, Bill Tutty and Jodi Tutty (apologies to anyone I have omitted).

Various members who have been travelling are now home, have ‘done their time’ in isolation and are healthy – good news!

Len Dixon was, because of the current covid-19 limits on assemblies, the only Canberra Bridge Club member able to attend last Monday's funeral, in Woden Cemetery, of his 97-year-old friend Donald Leslie who died in Sydney to which he moved from here a few years ago to be near his descendants.

The many Canberrans who fondly recall some or all of Donald's involvements over the past more than half a century in a variety of ACT bridge-related occasions will no doubt join us in condoling with his daughters Michal and Gial and his son Jonathan.

In 1967, partnering the late Neville Pearson, Donald was one of the few Canberrans who competed in the first-ever trial to select the Australian international open team.

Any message emailed to This email address is being protected from spambots. You need JavaScript enabled to view it. will be promptly forwarded to his children.

Renovation of the bathrooms is a job that the committee has been considering for some time. We sought quotations before the closure and have decided to perceive a silver lining in the COVID-19 cloud and have the work done now. This money comes from consolidated revenue, thanks to the excellent financial management of past committees.

So unfamiliar cars, especially utes, are not a cause for concern.

The work started on Wednesday 1 April and the old tiles have been removed and a number of tests are being done to check if there are any leaks.

Photos of progress will be added to the website gallery as work continues.

Figuring dummy for a spade singleton or void on the auction, South optimistically barrels into 6♥. West's opening lead is the 3♠, won by East's Ace♠. At trick two, East returns the J♣.

South knows that East should have played the K♠ (the lower of two touching honours) if holding both the ace and king. South can also count 22 HCP between his hand and dummy, and East has just advertised 5 HCP. Therefore, West should hold both the K♠ and K♣ to justify an opening bid.

South, then, should spurn the club finesse and try a ruffing finesse in spades. At trick two, he wins the A♣ and proceeds to draw trumps, finding them 1-1.

South now leads the J♠ through West for a ruffing finesse. If West covers, then dummy ruffs and South returns to his hand via a trump to play spade winners, dumping club losers from dummy. If West ducks the J♠, then South pitches a club from dummy and continues with the T♠. Either way, South's losing clubs can be ruffed in dummy to make the contract.

There will be no bridge sessions or lessons or social events in the club before 18 April. The committee will let you know of ongoing plans before then.

Lighter Moments - in the time of COVID

What is a group of twenty?

Two weddings and a funeral.

Do the people working extra shifts to produce more toilet paper get paid overtime or do they get time in loo?

I am fed up with looking after my mother-in-law's grandkids. 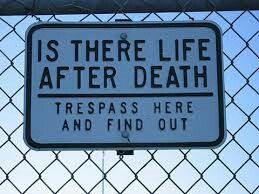